Mini restoration and Miracle Detail Finishes It Off! 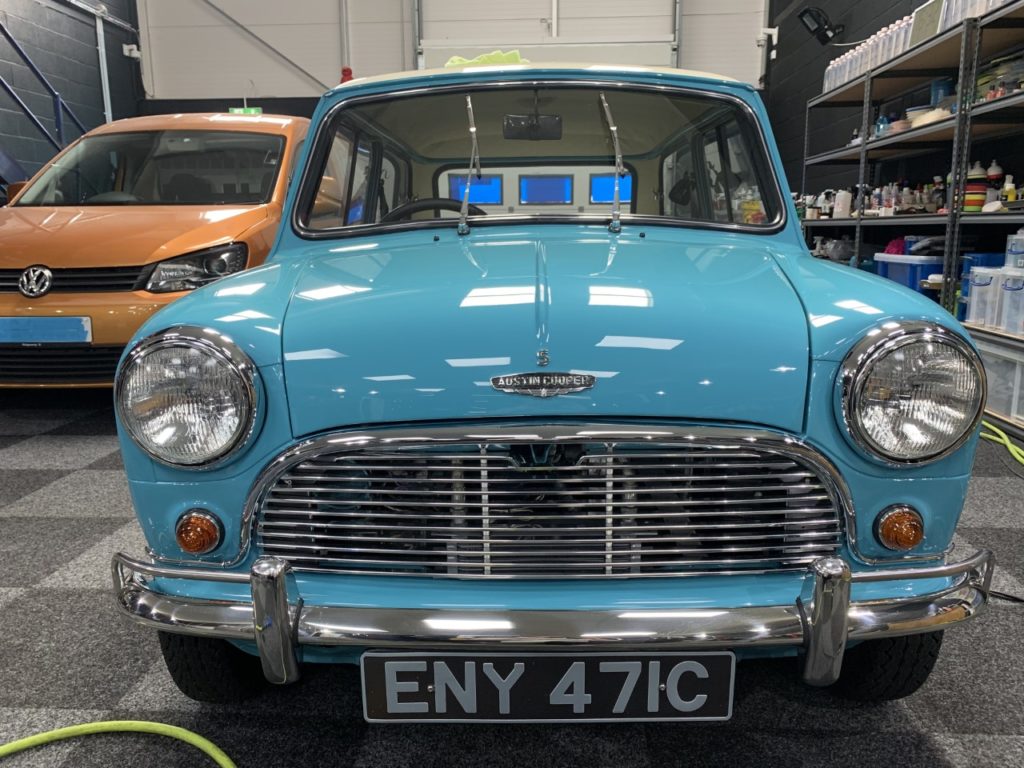 I’ve owned and driven Minis for over 26 years. It started as I neared my 17th birthday, keen as mustard to get behind the wheel and my Dad realised that putting L plates on the Triumph Stag he’d just painstakingly restored was not his preferred option. My mother had always liked Minis as a friend of hers had one. Of course in the early nineties they were still in production and there were lots about.
We acquired a very tidy 1986 Mini City 1000 in Moonraker metallic blue. With my test passed and university looming I bought my very own Mini six months later, a 1980 1000 with an excess of rust and an absence of synchromesh. Valuable training in vehicle sympathy I quickly found. After hacking about in it for three years and indeed hacking it about by having a cabriolet conversion done it was sold on as a project. It was replaced with an immaculate one owner 1993 Italian Job, which I still have to this day, 22 years later.
In 2010 I inadvertently added to my Mini collection. I saw a pageant blue 1975 Pickup on eBay and thought it was pretty cool. I bid £3600, beer induced wisdom convincing me it would go for about £5000. Checking eBay the following day led to me asking Dad if he fancied a trip up to Peterborough to collect it. The Pickup is awesome, regularly getting notes left asking to buy it, and pictures taken.
And so to the Cooper S. A good friend of mine Gareth had mentioned to me that his father in law Bob had “an old Mini” he used to race back in the 60s and that it had been in the garage in Cardiff since before his wife was born. In early 2016 Gareth told me over a beer that Bob had unfortunately suffered a stroke and that looking ahead they’d probably want to move house, which would mean selling the Mini. Knowing I had a couple he asked if I’d be interested. He didn’t know what it was or really what state it was in so he promised to find out. A few weeks later in the local pub he had the details. Gareth is not what you’d call a classic car enthusiast so he’d written it down on a scrap of paper which he fished out of his wallet. He said Bob was the second owner, having bought it from his friend who he’d actually driven to collect the car brand new. He read it to me, “It’s a 1965, Mk1, Austin Cooper S…..”
And so a trip to Cardiff was swiftly arranged. The car had been used for competition and had a roll cage, the extended switches for lights and wipers and so on. It had needed engine work amongst other things and so was put in the garage in 1975, the year I was born. Family obligations however meant the Cooper stayed put and slowly things got stacked on it and around it to the point that it became hidden in plain sight, slowly rotting away. I was very proud to be sat in it, steering it as it was gently dragged out after 40 years.
It was recovered to Somerford Minis in Wiltshire who I’d visited and felt confident was the right firm to carry out a total restoration. And there it sat amongst other Minis for 2 years, waiting its turn in the restoration queue. I’d joined the Mini Cooper Register who have been the most tremendous source of knowledge and support. I had the original green logbook authenticated by a club official, then the car inspected by another to be satisfied that it was what it purported to be. The MCR then handled the DVLA paperwork and in November 2017 I received the letter I’d been hoping for. I could keep the original registration number! This was a sweet success as the DVLA had written to Bob in the 80s to advise he couldn’t keep the original number having missed the deadline as the DVLA moved to the national database it is today. ENY 471C would be back on the roads.
In April 2018 I got an email from Peter Hines at Somerford, it was my turn. Somerford work on the basis that once they start, it’s one person’s full time job. Mine was entrusted to Rob, who had completed many of Somerford’s restorations. I felt it was in very safe hands. And so began a regular routine of visits every two or three weeks, photos taken, chats about the detail from re-chroming to rustproofing, camshafts to carburettors.
Over the weeks, I saw the shell reduced to almost nothing and rebuilt from the ground up. The engine was sent off for machining, original chrome sent for rechroming, new interior ordered. Everything at Somerford was a very well-oiled machine, project managed perfectly. Restoring classic Minis is what they do. Slowly it began to look like a Mini again and before I knew it, it was in the paint shop. I wanted it returned to factory spec, so it was going back to Surf Blue with an Old English White roof.
On 10 December 2018 collection day came. I couldn’t believe it. After 25 years of continuous Mini ownership, the dream had come true. I had an absolutely concours Mk1 Cooper S. The standard of Somerford’s workmanship was second to none, the car looked absolutely sensational. Driving it home was quite an experience, I got numerous crazed waves and thumbs up from other motorists! Just before Christmas I drove up to my mate Gareth’s house, knowing that Bob who had recovered well would be there. The smile on his face as I took him for a drive was just priceless.